The beginnings of air traffic in Braunschweig date back to the year 1916. The Braunschweigische Verein für Luftschifffahrt (an aeronautics club) created an airfield in Broitzem that was also used by the military from 1917. In the early 1930s the Ministry of Aviation (Reichluftfahrtministerium) decided to relocate operations to the current site in the north of the city because of more favorable weather conditions. In June 1934 the Ministry founded the Flughafengesellschaft Braunschweig-Waggum. After the excavation work was completed the first landing took place in September 1935 and the official inauguration in May of the following year. The Deutsche Forschungsanstalt für Luftfahrt (DFL) – a research institution specializing in aviation – also came into being in 1936. It was a predecessor of the German Aerospace Center (Deutsches Zentrum für Luft- und Raumfahrt, DLR). The infrastructure at the airport comprised a central terminal building, the flying school of the association, the Deutscher Luftsportverband, repair workshops, hangars as well as a glider pilot school together with its grounds. 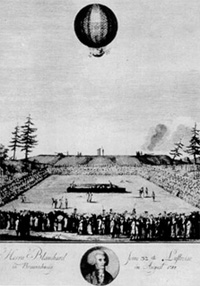 Its integration into Deutsche Lufthansa’s network – there were direct flights to Berlin, Halle and Hannover, to name a few destinations, and transfers to Dresden, Münster and Nürnberg were also possible – meant that there was an upsurge in air traffic. This however found an abrupt end with the Second World War.
In the year 1953, the institution Deutsche Forschungsanstalt für Luft- und Raumfahrt, the successor to the DFL, took up its research work again. Air traffic itself only began again in 1955. In the same year, the Federal Office of Civil Aviation (Luftfahrtbundesamt, LBA) was established in Waggum. The airport was mainly used by recreational aviation clubs and the academic flying club of the Technical University Braunschweig at this time.

Through its proximity to the border of the former GDR, the airport was assigned a special position in recreational flying and gliding. West Berliners frequently made use of Braunschweig Airport, as it offered favorable conditions Balloon due to its location on the then transit highway.

After an asphalt runway was built in 1967, heavier aircraft were also able to land at Braunschweig Airport. This came in useful for the Volkswagen concern, above all, which was now able to station its private fleet of planes close to company headquarters in Wolfsburg.
In the middle of the 1980s the airport was permitted to implement limited instrument flights. Since Germany’s reunification in 1989, it has first and foremost served as a regional airport for the commercial transport of the companies and authorities located here as well as a test site for the DLR and institutes of the Technical University Braunschweig. The airport is run by the Flughafen Braunschweig-Wolfsburg GmbH. Its main shareholders are the city of Braunschweig (42,6%), the city of Wolfsburg (17,8%), treasruy shares (35,6%) and the Administrative Districts of Gifhorn and Helmstedt currently each own two percent of the shares.